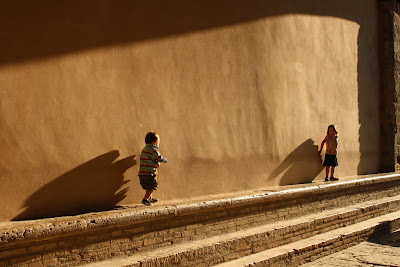 Thought I'd take a minute or two to update you on the latest adventures of Elise and Caleb!

ELISE recently went with me to see the Sigonella community theater's production of Annie. I think she's been singing show tunes and pretending to be on the stage ever since! We finally made her a cd of a selection of songs from Annie along with a few other favorites from Mary Poppins, The Sound of Music (Grant and Lydia's most recent H.S. musical) and an encore performance of "Born to Hand Jive" - a favorite from Grant's musical last year. She's currently listening to it about 5 times a day! 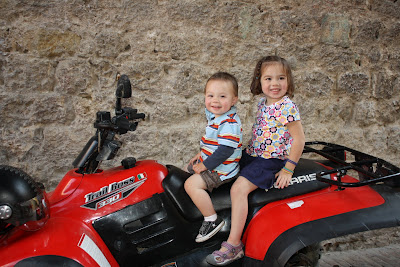 When she's not "on the stage" she loves to play school and house with her growing cast of stuffed animals - Caleb happily joins in most of the time as well. It's really funny to hear them having conversations like big people as they mimic many of the things that Josh and I do and say in their make believe play. 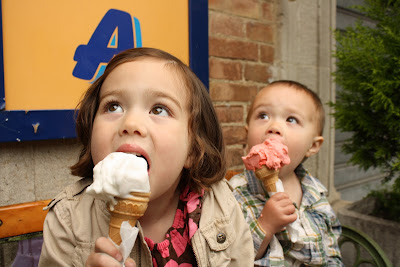 Now that the weather is nice we're spending lots of time outside. Josh very lovingly mowed the entire back yard (which was well over a foot high), so we finally have some outdoor space to explore. Of course the kids are busy looking for lizards, chasing bugs, and picking just about every little blossom they can find. (since most of them are just "pretty weeds" I don't mind!) Yes, it takes us about 3x longer to accomplish any task now that spring is upon us...not just because I always have 3 small children in tow, but mostly because Elise has to stoop down to examine, smell, and usually pick a handful of flowers wherever we go.

CALEB continues to be the jovial and silly character that he's always been. He's very proud to be two (although he's already telling people that he's going to be three - in 10 months, mind you!) and has recently learned the art of jumping with two feet at the same time. This has made for a lot of hopping and jumping around the house...and even a new form of movement which he's termed his "hop-skip." He is in love with Josh's guitar and frequently requests a pick and "my tar" so he can strum a little tune - most often "Deep and Wide" or "Lollipop" with his own version of "Edelweiss" (a.k.a. Edel-bise) sometimes thrown in. (another tribute to Grant and Lydia's recent H.S. musical production) 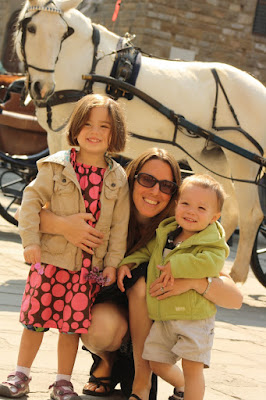 When he's not playing a song he's usually busy getting ready for his "rocket team practice" with his tennis "rocket" in hand. The game he plays looks very little like tennis and actually mostly just involves him carrying around the carrying case with the "rocket" inside, but we love his creativity and he sure seems to be having fun.

We feel very blessed that the kids get along with each other as well as they do. I can't quite believe how never-ending the task of teaching small children how to be kind, polite, obedient, selfless, and honest can be. I guess it shouldn't be that surprising since I'm still working on learning those same lessons myself...still "poco e' poco" as my neighbor always tells me...little by little...we're all learning and I guess I can't ask for much more than that. :)
Posted by Josh and Rebecca Arthur at 2:44 PM