While I was getting dinner ready tonight we heard the kids screeching on the porch outside.  It was hard to tell if they were squeals of pain or of glee, so Josh went to check out the situation.  Elise and Caleb were tangled up on their bikes, but shouting for joy because Lucas was pedaling his tricycle for the first time by himself.  (just what I need - a new 'stunt' for my danger boy!)  Well, as you can imagine, Lucas was quite proud of himself.  That boy has even perfected  the "Ben" look (the quirky little semi-bashful smile that my brother Ben always got when he was proud of himself for something) for all his little accomplishments. 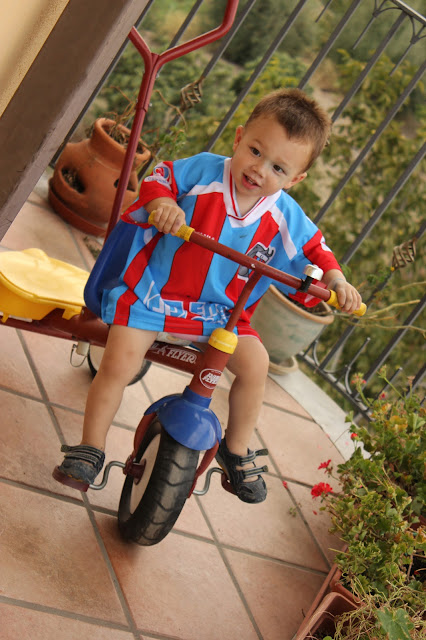 In other exciting news, Elise came home pleased as could be that she'd learned how to play Red Rover in PE class today.  She lined us all up after dinner and taught us how to play.  Reminds me of a few gym stars I know and love.
Posted by Josh and Rebecca Arthur at 3:51 PM No comments:

Off the beaten track...a spontaneous adventure.

I love "off the beaten track" adventures - though, admittedly, I prefer the ones recommended in guidebooks (is that an oxymoron?)  My dear sweet Josh is quite the opposite.  He wants to explore real live "we're the only people who have ever been here" places...so today, that's what we did - well, sort of.  Our destination:  the town we can see on the hill far in the distance when we're sitting on our porch.

Hmmm...well, we started with a map which gave us a name - Centuripe (chen-tour-ee-pay) and from there we got GPS coordinates.  While looking at the map to find said city, Josh saw that there was a reservoir just past the town, so we added that to the list as well.  Okay, so not exactly "we're the only people who have EVER been here" places, but definitely "we've been in Sicily for almost 3 years, what else is there to see" places.  It was a beautiful, fun, and spontaneous day! 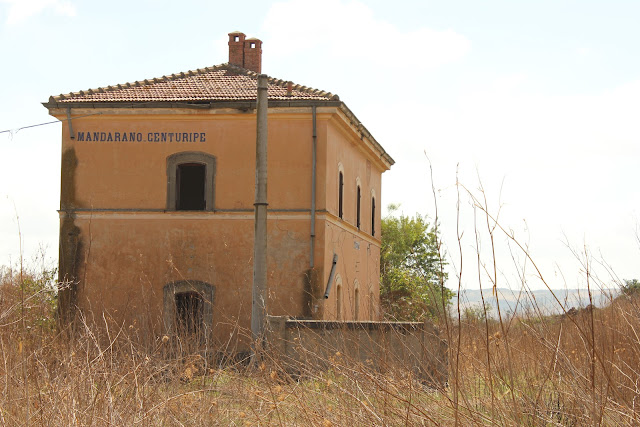 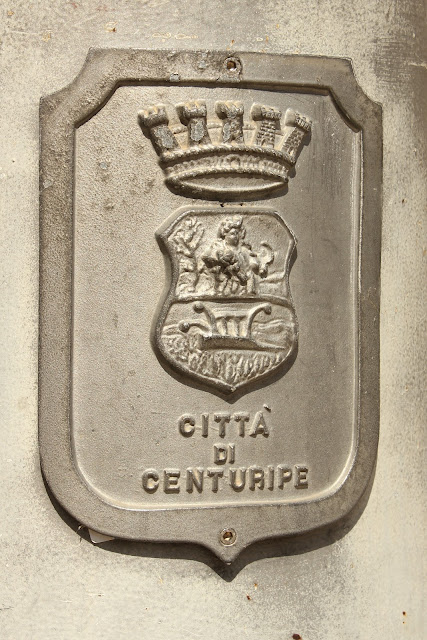 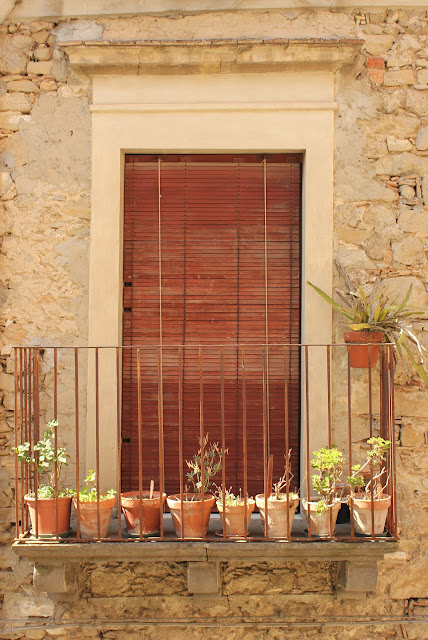 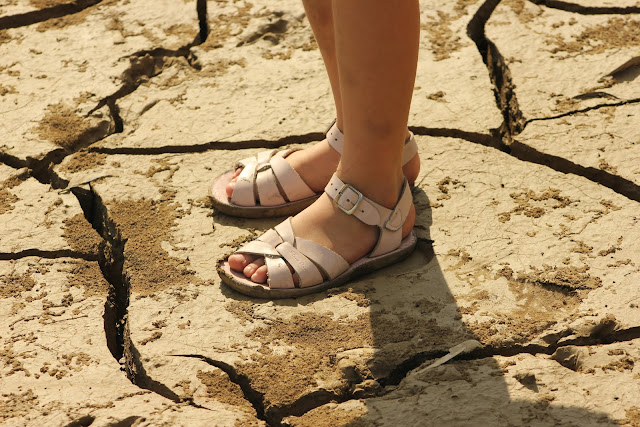 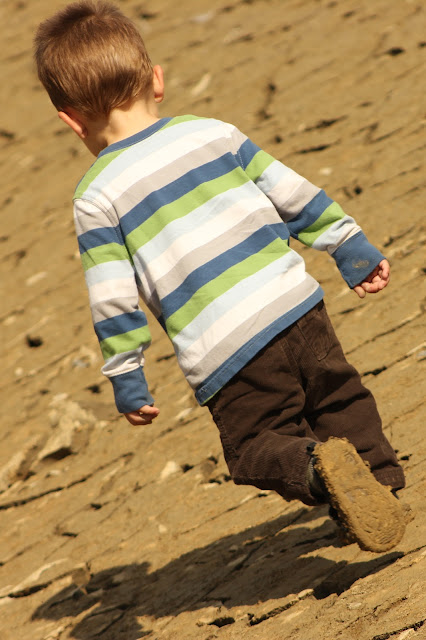 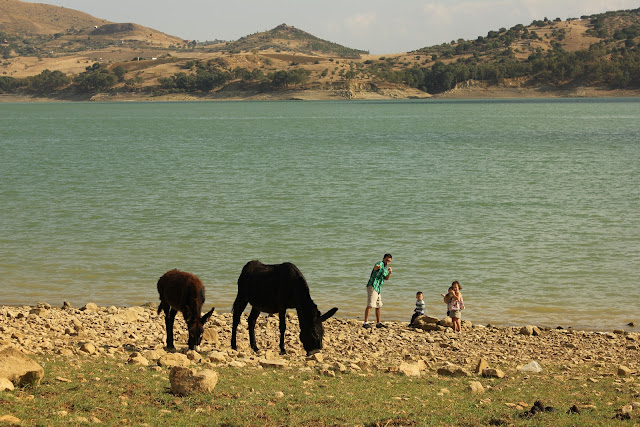 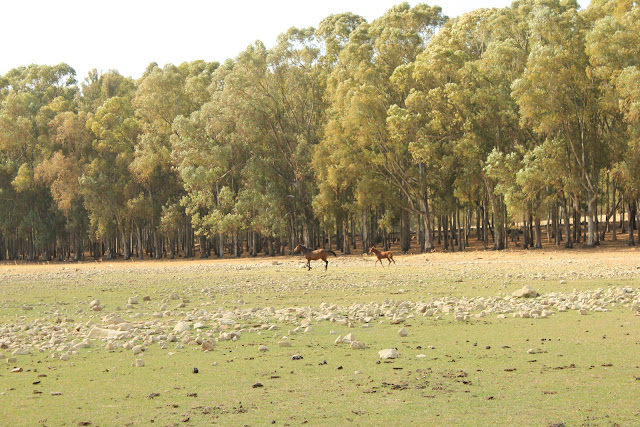 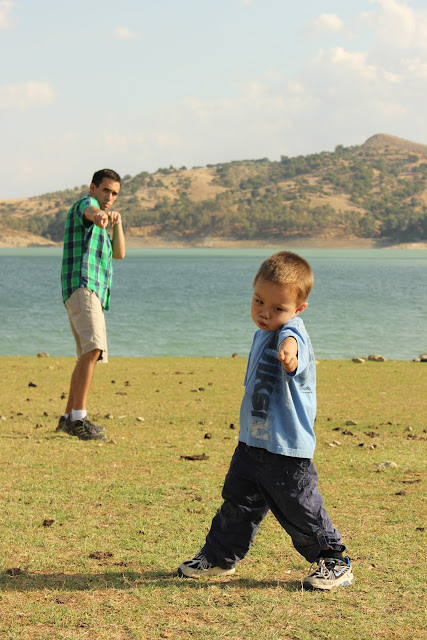 We stopped on the way home and picked up pizza. (after 2 years here, I just figured out that there's a place in town that's open BEFORE 7:30!)  I couldn't believe the little boys each scarfed down 3 pieces - I guess they worked up an appetite on our adventure.  Also had some left over granite that we've been savoring since it's the last batch of summer from our favorite shop in town.  It was a good day!
Posted by Josh and Rebecca Arthur at 4:18 PM 3 comments:

Elise and Caleb have been counting down to the start of their first soccer "season" for weeks and it is finally here!  I have to laugh because they're pretty sure that they're ready for Olympic level competition!  To their credit they've really only ever experienced soccer by watching the Olympics, the European Championships, and none other than Messiah College (Div. 3 National Champs on multiple occasions!)  It's no wonder they have high expectations.  As it turns out, they still have to start at the very beginning,  but it was a very good place to start.  They loved it! 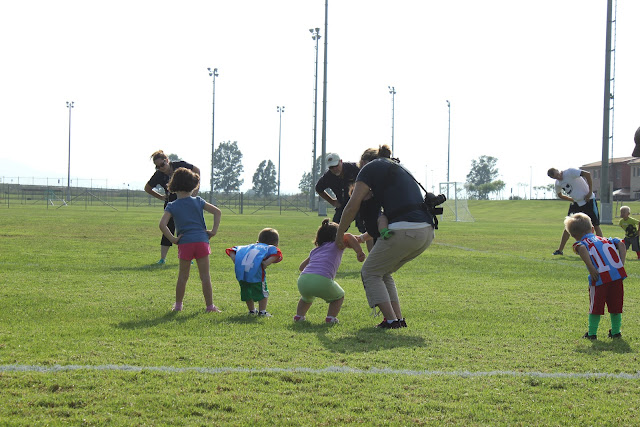 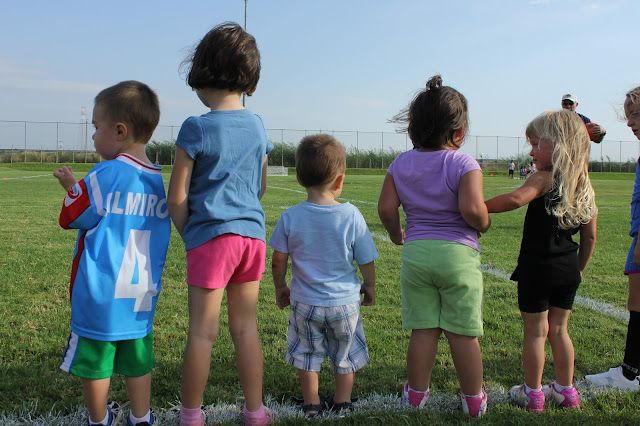 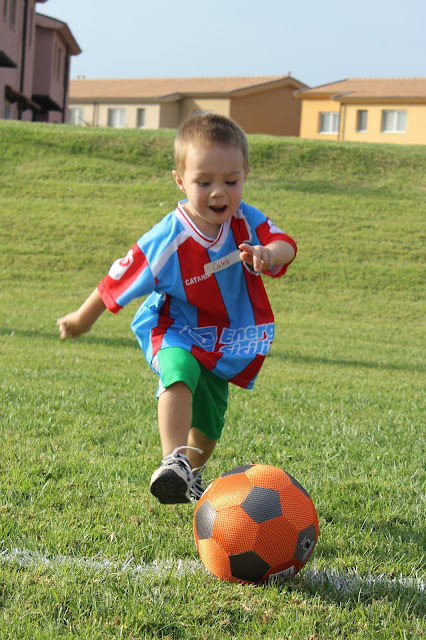 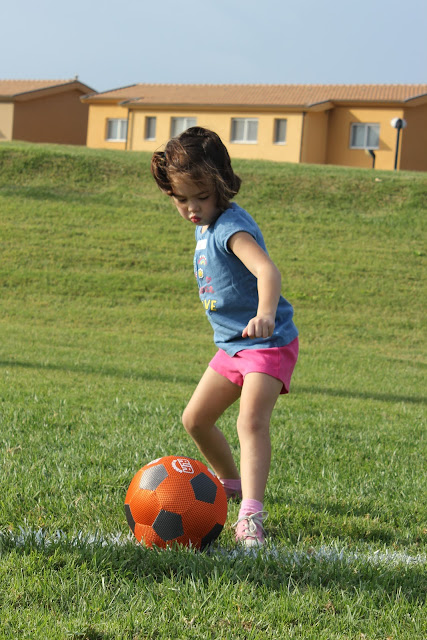 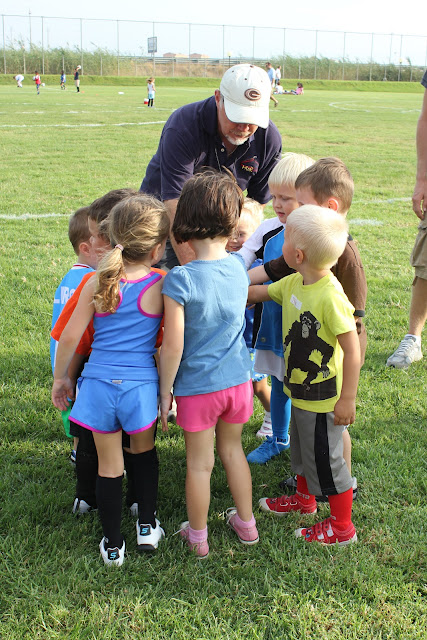 Posted by Josh and Rebecca Arthur at 3:07 PM No comments:

A birthday cake for me.

Josh gets major birthday props for having the super sweet idea to make a birthday cake for me...with help from our tremendous trio, of course!  I chose a mounds coconut cake (my cousin Lara's recipe) and they went to work...


Posted by Josh and Rebecca Arthur at 2:47 PM No comments:

As I mentioned before, Caleb and Lucas seem to be the ones having the hardest time with being "left behind."  I, in turn, go from feeling overwhelmingly sorry for them to feeling just plain overwhelmed by them as we try to figure out the new dynamic with the three of us at home.  So far, very few of my tricks, ideas, or "special" events have seemed to impress Caleb...but we'll keep trying and hoping we get the hang of this before too long.  Actually, that makes it sound a little worse than it is.  I guess I just can't do enough special things to make him feel like it's just as fun at home as it is at school...poor thing. 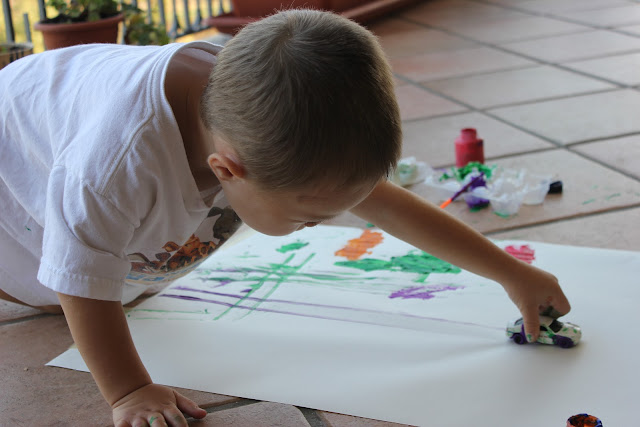 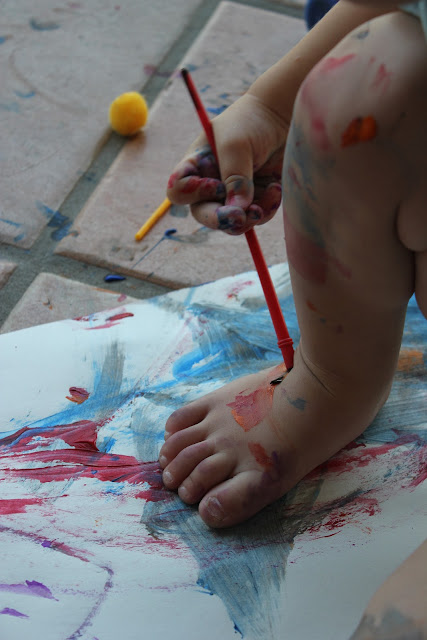 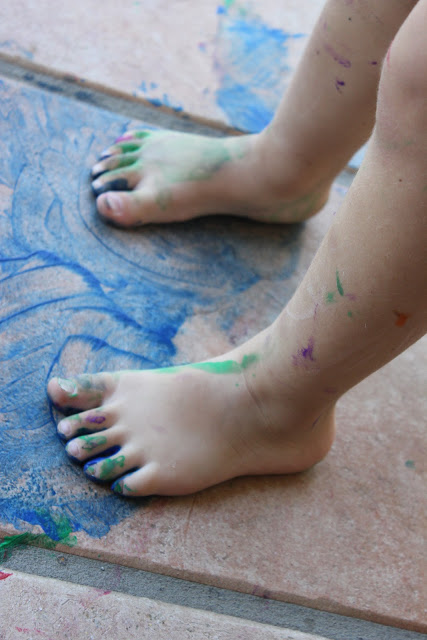 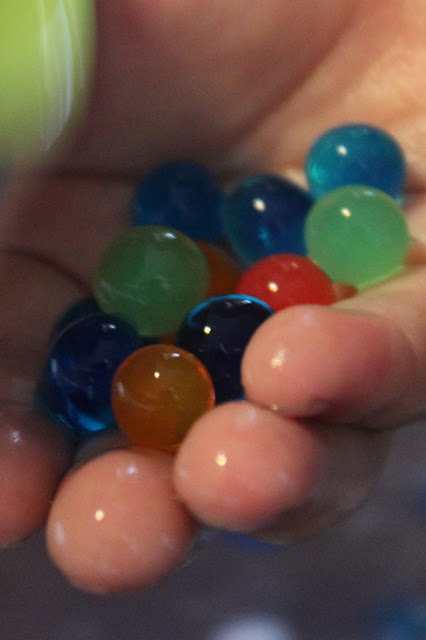 Posted by Josh and Rebecca Arthur at 4:48 PM No comments:

Is it summer yet?

Elise woke up Monday morning and while we were getting breakfast set out she asked "Mom, when are we going to be done with this?"  To which I replied "Done with what?"  To which she answered "I mean, when will it be summer vacation again?"

I think we may have all been feeling that way on Monday morning.  This kindergarten thing is tiring work for all of us!

When I relayed the story to Mr. Atkinson he said "Wow, sounds like she's ready to be a teacher!" Josh thought that was funny. (and true.)

Seriously though, school seems to be going quite well for her.  We're slowly learning about new friends that she's getting to know and she's pretty chatty about the events of the day when she gets off the bus.  This week they have an author visiting the school, so that has been fun.  She also started ballet and tomorrow she and Caleb will have their first soccer practice.
Posted by Josh and Rebecca Arthur at 3:12 PM No comments:

Elise ended the week with her first little school head cold and after dinner on Friday night Lucas got sick ALL over me! (we're talking in my ear, down my back, in my underwear sick - gross!)  Needless to say, we needed some r&r for our weekend.  So we enjoyed the beautiful weather and just puttered around the house together...we got a few things done, too!


Posted by Josh and Rebecca Arthur at 2:58 PM No comments:

Well, we're off to a pretty good start.  Elise has come home beaming all three days and happily tells us stories of all the learning (and playing!) that she has done.  She has remembered the names of a few new friends in her class and has enjoyed all the "new" (books, toys, craft supplies, etc...) things she's gotten to use in her classroom.


The boys and I are SLOWLY adjusting to not having Elise here at home with us.  The rhythm of our days has changed fairly drastically in the past week, so it will take some getting used to.  I have to remember to be patient with myself and the boys as we all settle in and acclimate to our new "normal."  By about 11:00a.m. Caleb does not want to wait any longer for Elise to come home.  He has seemed a bit lonely and out of sorts, but I think that he will grow into his big brother role before too long!  Lucas is really sad to see her go in the morning (he yells and cries, "go, go, car, school" when she and Josh drive out the driveway), but I don't know if he notices during the day.  Still he "talks" about Josh and Elise whenever he sees or hears something that reminds him of them.

Posted by Josh and Rebecca Arthur at 4:14 PM No comments: 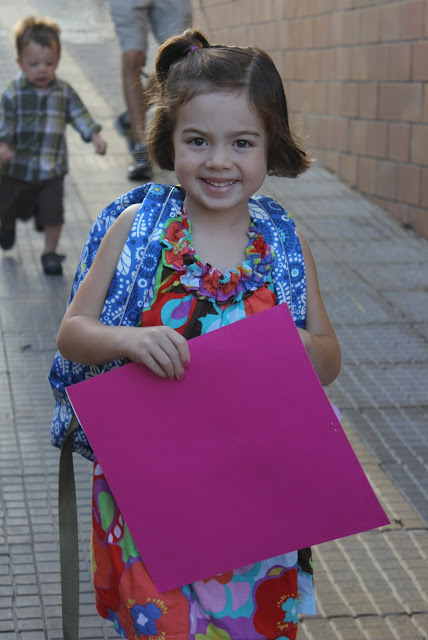 Well, we made it!  All the first day jitters have subsided and the kids are tucked in (though still happily reciting a poem that Elise learned at school today!)

Here are a few more things that we heard about the day:

*  The play ground is very fun.
*  Her shoes were perfect and did not hurt at all.  (this was a concern because she has to wear good "play" shoes, but she chose a dress...how to mix fashion with practicality...what a dilemma!)
*  Her lunch was great, but she didn't have quite enough time to eat it. (the kids shared the leftovers as a snack when we got home)
*  They read one book.
*  She looked at a book about animals learning their ABCs.  It was silly.
*  She sat next to a girl who had a dog wearing sunglasses on her shirt, but didn't know her name.
*  She learned a very silly song that includes the words "bottoms up" (get it?  you stick your bottom up in the air while you're dancing - ha, ha, ha, ha, ha)  By Elise's account it's called "A Roosta Sha" but I'm not sure about that...  That's the song that she and Caleb are still singing now.
*  She learned how to roll her rest time towel into a snail (that's how they get stored in their cubbies)
*  She would like to ride the ride the bus tomorrow.
*  She got a lollipop and a certificate for having a great first day.

A few things I'm thankful for:

*  That Josh got to go in late to work so he could help us with our first day hubbub.
*  That my friends Karla and Anna (who were also first time kindergarten moms) came over for a breakfast play date after we dropped off the big kids at school.
*  The thoughts, prayers, calls and e-mails from a host of family and friends.  We felt very loved!
*  That we remembered almost all the required school supplies and all the logistical details that had to happen today.
*  That the 5 o-clock soccer meeting was cancelled.  A third trip to base today was NOT going to be fun.

A few things that I hope go better tomorrow:

*  The waking up and many moving parts of our new morning routine.
*  My own time management in getting the boys down for early naps so that we can pick Elise up from the bus stop.  (which is all the way at the end of our road - ugh!)
*  That Lucas won't make quite so many messes.  (One can always hope!)
*  That we don't spill 3 cups of milk in one afternoon.
*  That I don't get locked out of the house with the boys because the wind blows the door shut while I'm helping Karla get our pack n' play in her car.  (Thankfully Graziella had a spare.  She handed me a pile of 20 keys and said she hoped one would work.  Meanwhile, the boys feasted on chocolate cookies and watched Italian cartoons - that was their lunch!)
*  That I don't feel quite so wiped out at the end of the day!  (perhaps the boys only having 20 minute naps and whining from 3 - 7 had something to do with that...who knows.)

Posted by Josh and Rebecca Arthur at 3:33 PM No comments:

Email ThisBlogThis!Share to TwitterShare to FacebookShare to Pinterest
Newer Posts Older Posts Home
Subscribe to: Posts (Atom)
A glimpse into our comings and goings here in St. Louis and the happy chaos along the way.